Britain just made a BIG move against Russia (Putin is FURIOUS!) - The Horn News 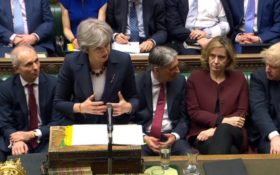 Britain has called for a meeting of the U.N. Security Council to discuss the investigation into the chemical agent attack on a former Russian spy and his daughter.

The U.K. Foreign Office said in a tweet Wednesday that it called for an “urgent” meeting to update council members on the investigation into the March 4 attack on Sergei Skripal and his daughter Yulia.

Prime Minister Theresa May announced that Britain is expelling 23 Russian diplomats after the nerve agent attack — the single biggest such expulsion since the Cold War.

May told the House of Commons on Wednesday that Russia has expressed “disdain” for Britain’s wish for an explanation into the attempted murder of former spy Sergei Skripal and his daughter Yulia. She says that Russia’s actions “represent an unlawful use of force.”

May said the Russian diplomats have a week to leave Britain.

She also announced a range of economic and diplomatic measures, including a decision to cancel all high-level bilateral contacts with Russia and to ask the royal family not attend the soccer World Cup in Russia.

Russia has denied responsibility in the March 4 attack on the Skripals.