Brexit in CRISIS!? (and why America may benefit) - The Horn News 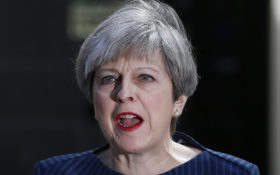 The UK Parliament rejected her Brexit deal AGAIN. After an ugly defeat, 432 to 202, many critics think the May deal is doomed to die on the vine… and with 72 days left, the UK looks in serious trouble.

For American interests, though, it’s not such a bad thing.

If the UK drops out of the EU without a deal agreed upon by both sides by March 29th (referred to as “No Deal”), the UK would be free to install its borders as it wants to. The point of Brexit was to no longer entertain the burden of heavy immigration. For so long the UK has been attached to the sloppy immigration policy of the EU.

The UK voted for a change.

Most importantly for America’s interest, under a no deal Brexit, Britons could enter trade agreements with any nation they choose.

Ideally, that means exclusive agreements between the U.S. and UK without EU market regulations.

President Donald Trump has publicly expressed concern in the past that May’s Brexit deal between the two entities would be good for the EU… but he hasn’t been hopeful for what the UK would get out of it.

“If you look at the deal,” he told reporters, “they [UK] may not be able to trade with us. And that wouldn’t be a good thing.”

The BBC reported that the US is the largest export market for the UK as of 2016.

Never mind the fact that May’s proposed deal was nothing like the promise of sovereignty that the British citizens voted for in the first place.

In negotiations with the EU, May caved in full by appeasing the EU with extremely weak immigration policy, an issue central to so many Britons, and the sole reason many of them voted to leave.

The British people won’t have it anymore.

Neither will her fellow members of parliament.

The pressure only increases after May narrowly passed another no confidence vote in the House of Commons, as she is expected to go back to the drawing board and draft a deal for the good of the British people.