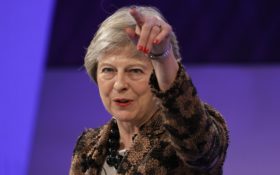 British Prime Minister Theresa May sought to seal business support for her Brexit deal with the European Union on Monday, but remained on a collision course with a group of lawmakers seeking to unseat her.

The draft agreement has triggered an avalanche of criticism in Britain and left May fighting to keep her job, even as she races to firm up the final deal before a crucial EU summit.

May told business lobby group the Confederation of British Industry that “an intense week of negotiations” lay ahead to finalize the framework for future relations between Britain and the bloc before EU leaders meet on Sunday to rubber-stamp the deal.

Last week — after a year and a half of tense negotiations — Britain and the EU agreed on the terms of their divorce. But while the 585-page, legally binding withdrawal agreement is complete, Britain and the EU still need to flesh out their far less detailed seven-page declaration on future relations.

May told her business audience Monday that the “core elements” of the future relationship were in place. She said the deal “fulfils the wishes of the British people” to leave the EU, by taking back control of the U.K.’s laws, money and borders.

May confirmed the government’s plan to end the automatic right of EU citizens to live and work in the U.K., saying Britain’s future immigration policy will be based on skills, rather than nationality.

“It will no longer be the case that EU nationals, regardless of the skills or experience they have to offer, can jump the queue ahead of engineers from Sydney or software developers from Delhi,” May said.

The deal has infuriated pro-Brexit lawmakers in May’s Conservative Party and sparked a leadership crisis. The Brexiteers want a clean break with the bloc and argue that the close trade ties called for in the agreement will leave Britain a vassal state, bound to EU rules it has no say in making.

Two Cabinet ministers, including Brexit Secretary Dominic Raab, resigned in protest, and rebels are trying to gather the signatures of 48 lawmakers needed to trigger a no-confidence vote.

One of the rebels, Simon Clarke, on Monday urged wavering colleagues to help trigger a leadership challenge.

“It is quite clear to me that the captain is driving the ship at the rocks,” Clarke said.

Even if May sees off a leadership challenge, she still has to get the deal approved by Parliament. Her Conservatives don’t have a parliamentary majority, and it’s not clear whether she can persuade enough lawmakers to back her agreement.

May argues that abandoning the plan, with Britain’s withdrawal just over four months away on March 29, could lead to a disorderly and economically damaging “no deal” Brexit — or to a situation in which Britain’s exit from the EU is postponed indefinitely.

Some Conservative Brexiteers, including Raab, say May should stay in post but try to renegotiate the deal — something May and other EU leaders insist is impossible.
The European Union’s chief Brexit negotiator says that a draft deal on Britain’s exit from the bloc was “fair and balanced,” adding that it allowed for an orderly withdrawal.

Dutch Foreign Minister Stef Blok said Monday that “the withdrawal treaty is as good as it will get,” while Luxembourg Foreign Minister Jean Asselborn also said there is “no better” Brexit deal for Britain.

“We must make it understood today that this deal which is now on the table is the best one possible. There is no better one for this crazy Brexit,” Asselborn said as EU foreign ministers met in Brussels before a leaders’ summit on Sunday at which the bloc intends to sign off on the deal.

EU chief negotiator Michel Barnier said the EU ministers “have agreed to the principle” of a one-off extension of the post-Brexit transition period if the two sides need more time to finalize a trade deal. Under the divorce agreement, Britain agrees to be bound by EU rules during the transition, due to end in December 2020.

Barnier wouldn’t give a specific end-date for the extension. It’s a delicate issue for May, because some in her party worry the extension could be used to trap Britain in the EU’s rules indefinitely.

May says any extension must be finished before the next U.K. election, scheduled for the first half of 2022.

Striking a defiant note, May said “we have in view a deal that will work for the U.K. And let no one be in any doubt – I am determined to deliver it.”

“A painful week in European politics is starting,” he said. “We have the divorce papers on the table; 45 years of difficult marriage are coming to an end.”