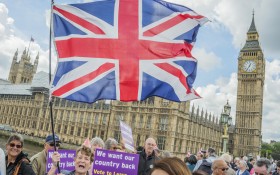 Experts are warning of an unintended consequence of Brexit that could change the world map forever.

And the United Kingdom as we know it… would be over!

A series of alarming reports reveal how the Brexit drama is causing many in the United Kingdom to question whether it’s worth being part of the U.K. at all.

And eventually, all that would be left in the country that many Americans already refer to as England… would be England.

“It seems to me that the clock is now ticking for the end of the Union of the United Kingdom,” former Deputy Prime Minister Nick Clegg told Scotland’s Herald newspaper. “I am afraid I’ve sort of come to the view that is now more likely than not.”

The nation’s Brexit negotiations have been so tense and complicated that May, who took office on the promise of delivering the separation from Europe, is now leaving office in failure.

In her place, Brexit leader Boris Johnson is expected to become the next prime minister. His job would be to deliver a clean Brexit by the latest deadline of October 31.

However, most observers believe the problem isn’t the prime minister but the actual details of the Brexit itself.

May’s deal was rejected three times by her fellow members of parliament.

The difficulty lies in trying to make all sides happy with the Brexit pact.

That’s leading to frustration and growing calls for independence from many other parts of the once-united kingdom.

“Right now the breakup of the union looks extraordinarily likely, if not inevitable,” wrote Guardian columnist Dawn Foster. “It means if Johnson does indeed become the next U.K. prime minister, he may also be its last.”

While Brexit was overwhelmingly popular in England and Wales, Scotland and Northern Ireland are another story.

In Scotland, all 32 local districts – called councils – voted to stay in the European Union, with a total vote of 62-38 in favor or remain in the 2016 vote.

Scotland has always a strong nationalistic movement in favor of leaving the United Kingdom.

Brexit has only increased that sentiment.

In Northern Ireland, the tally was 56-44 in favor of staying in Europe.

The Brexit vote – and plans since – have reawakened some of Northern Ireland’s infamous divisions on the ground. And politically, the government in London has struggled with the practical nature of a border and customs between “Europe” in Ireland and the Northern Island of a post-Brexit U.K.

Members of parliament are trying to delicately navigate loyalties between Ireland and Northern Ireland — fearing a decision in either direction could incite violence between hardliners of the two countries.

And while Wales voted for Brexit, support for independence there has also risen dramatically as the EU exit has faltered. At 41 percent, it’s at its highest level ever… and roughly 30 percent more are at least willing to entertain the idea.

If there’s any hope for the union to remain, it’s this: A separation between Scotland and the rest of the U.K. could prove even trickier to negotiate than the Brexit itself.