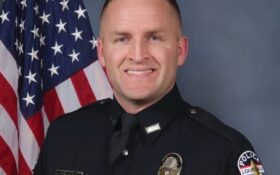 A former Louisville police officer who faces criminal charges in the Breonna Taylor raid is being sued by a woman who claims he sexually assaulted her.

The lawsuit filed Tuesday in Louisville alleged former officer Brett Hankison was working as a security officer in 2018 at a Louisville bar when he gave a woman a ride home and later sexually assaulted her.

Hankison was the only officer charged by a grand jury in September for firing shots that went into an apartment adjacent to Taylor’s unit. Taylor was shot to death by two Louisville officers during the March 13 narcotics raid. Hankison was charged with three counts of wanton endangerment; the other officers were not charged. He was fired by the department in June for his conduct during the raid.

The lawsuit said Hankison, 44, “used his police uniform and secondary night club employment as mechanisms to prey on innocent women.” It was filed by Margo Borders, who cited anonymous accounts from other women alleging Hankison had a pattern of giving women rides home from a bar in his police cruiser.

The suit also names the bar, Tin Roof, along with former Louisville Police Chief Steve Conrad and other officials in the department. Hankison was employed by the bar for about five years, ending in 2018, according to the suit.

The Associated Press generally doesn’t name victims of sexual assault, but in this case Borders has agreed to be named. Borders had gone public with the allegations in a social media post earlier this year.

Borders said the two met in 2017 when she was 22, and had a mutual friend. On the night of the incident in April 2018, the lawsuit said, Borders was intoxicated and Hankison offered her a ride home. When they arrived at her apartment, Hankison “invited himself inside,” but Borders was tired and went to bed in her room. While she was “unconscious,” Hankison went into the room and “violently” sexually assaulted her, according to the suit. The next morning, he messaged her to “suggest that the two had engaged in consensual relations,” the suit said.

Stew Mathews, an attorney for Hankison in his criminal case, said Wednesday that he wasn’t representing Hankison in the lawsuit and had only just heard about it.

Tin Roof said the allegations against Hankison were “reprehensible” and that the bar had terminated its relationship with him in the spring.

“Our company does not tolerate the abuse of power or discrimination in any form,” Tin Roof’s statement said.

Louisville police said they were investigating the allegations after Borders’ social media post in June. Hankison has not been charged with anything in connection with the allegations.