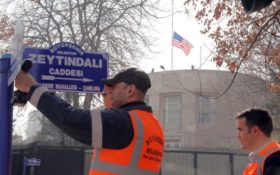 The U.S. Embassy in Turkey will be closed on Monday due to a security threat.

Turkey’s state-run media says Turkish police have detained four Islamic State suspects as part of an investigation into a possible attack on the U.S. Embassy in Ankara.

A statement posted on the embassy’s web page on Sunday urged U.S. citizens to avoid the embassy in Ankara as well as large crowds and to “keep a low profile.”

The statement said the embassy will be closed “due to a security threat. The Embassy will announce its reopening, once it resumes services.”

The Anadolu Agency said police detained four suspects on Monday — all of them Iraqi nationals. Two of them were detained on a bus at a security check on a highway linking the Black Sea city of Samsun to Ankara. Two others were detained in Samsun.

Security was high outside the U.S. embassy on Monday, and police searched pedestrians before allowing them to enter a street where the main gate is located.