Trump's articles for impeachment filed by Dems - The Horn News 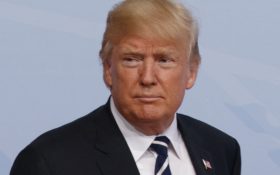 Representative Brad Sherman, a Democrat from none other than California, formally introduced Articles of Impeachment against President Donald Trump Wednesday afternoon.

Sherman is accusing Trump of obstruction of justice for interfering in the Russia investigation when he fired former FBI Director James Comey.

Critics were quick to point out that Trump appointed Robert Mueller, a close friend of Comey, to take over the Russia investigation.

Sherman tweeted out the articles:

I have introduced H.Res. 438 Articles of #Impeachment of Donald J. Trump for Obstruction of Justice. Statement here: https://t.co/0gKr8ZFg3c pic.twitter.com/yUTDAnPFuJ

There is little-to-no chance the stunt works. Critics say it’s political theater; a desperate attempt that it will find no success in the GOP-controlled House.

Even establishment Democrats are against a floor vote on the article — only one Democratic Rep., Al Green from Texas, has come forward in support of Sherman.

“In all of this, Donald John Trump has acted in a manner contrary to his trust as president and subversive of constitutional government, to the great prejudice of the cause of law and justice and to the manifest injury of the people of the United States. Wherefore, Donald John Trump, by such conduct, warrants impeachment and trial, and removal from office,” the impeachment articles read.

But Sherman must be thinking, “How much worse could it get?”

The Democratic Party has been in turmoil since twice failed Presidential nominee Hillary Clinton’s loss in November.

It’s likely that an ill-conceived move like this against the president isn’t going to help put the Democratic Party back into a positive light with the American people.