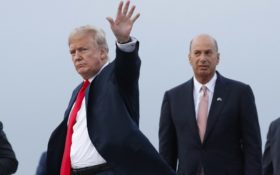 President Donald Trump’s victory in the standoff with Iran wasn’t the White House’s only big win this week.

According to reports, the Trump administration won a big court case Thursday involving the construction of a wall meant to secure the U.S.-Mexico border.

In Sep. 2018, the Trump administration diverted construction funds from the Department of Defense to help fund nearly a dozen wall construction projects on the southern border.

A lower court blocked the funds three months later — but the administration appealed the ruling to a higher court.

In a 2-1 ruling, the Fifth Circuit Court of Appeals reversed the lower court’s ruling and freed the funds.

Trump took to social media to share the good news —

Breaking News: The Fifth Circuit Court of Appeals just reversed a lower court decision & gave us the go ahead to build one of the largest sections of the desperately needed Southern Border Wall, Four Billion Dollars. Entire Wall is under construction or getting ready to start!

“The court also said there was a ‘substantial likelihood’ that the parties challenging the funding transfer – the county of El Paso, Texas, and the Border Network for Human Rights – lacked standing to sue the Trump administration,” Reuters reported.

The ruling is a major victory for the Trump administration and gives the White House a green light for construction, but the case remains ongoing.

“The United States Court of Appeals for the Fifth Circuit has lifted an illegitimate nationwide injunction entered by a lower court, and in doing so has allowed vital border wall construction to move forward using military construction funds,” White House Press Secretary Stephanie Grisham said in a prepared statement.

“This is a victory for the rule of law,” Grisham said. “We are committed to keeping our borders secure, and we will finish the wall.”