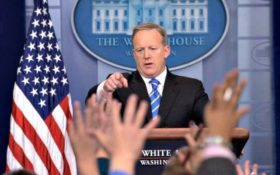 President Donald Trump has had enough of the liberal spin — and he’s floating an idea that could totally shake up the mainstream media.

Trump, it seems, is tired of “fake news” trying to twist his words, and has proposed doing away with press briefings for the mainstream media all together.

Instead, the White House would replace them with spin-proof written statements by the president.

As a very active President with lots of things happening, it is not possible for my surrogates to stand at podium with perfect accuracy!….

…Maybe the best thing to do would be to cancel all future "press briefings" and hand out written responses for the sake of accuracy???

No more attacks on Press Secretary Sean Spicer by rabid liberal journalists sounds nice, say supporters… but is it a good idea?

The idea has liberals panicking. The press briefing room is one of their favorite ambush spots, after all.

But even some conservatives have admitted they’re a bit taken back by the idea.

Is this a step too far?

We want to hear from you, The Horn News readers.

Vote below and then comment to let us know what YOU think of Trump’s anti-“fake news” plan.