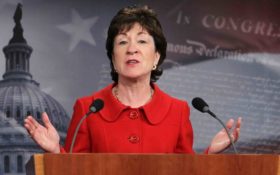 It’s widely suspected Collins will also be voting to confirm Kavanaugh over the weekend. The procedural vote Friday is seen as an important testing ground for Republican support for Kavanaugh.

Sens. Jeff Flake and Lisa Murkowski have yet to announce their position, but it’s suspected they’ll side with Collins.

Vote here on whether you’d like to see Kavanaugh confirmed —

Should Brett Kavanaugh be confirmed to the Supreme Court today?