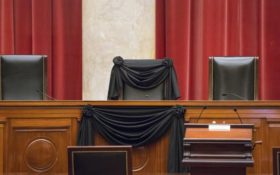 It’s the question on every voters lips: When will President Donald Trump’s Supreme Court pick be announced?

I have made my decision on who I will nominate for The United States Supreme Court. It will be announced live on Tuesday at 8:00 P.M. (W.H.)

According to legal expert and veteran reporter Jan Crawford, the chief legal correspondent for CBS News, the decision was finalized last week.

Trump is expected to give the nod to Judge Neil Gorsuch.

Gorsuch was appointed to the 10th circuit court by former President George W. Bush and legal experts consider him similar in many ways to former Justice Antonin Scalia. Specifically, the Colorado-based judge is considered a through-and-through conservative who reflects Scalia’s stance on the separation of church and state.

Trump wrote last year that “Neil Gorsuch is a judge of the United States Court of Appeals for the Tenth Circuit. He was appointed to the position in 2006. Judge Gorsuch previously served in the Justice Department as a Deputy Assistant Attorney General. Judge Gorsuch was a Marshall Scholar and received his law degree from Harvard. He clerked for Justices Byron White and Anthony Kennedy.”

The court has had eight justices since the death last year of Scalia. President Barack Obama had nominated Merrick Garland for the post, but Senate Majority Leader Mitch McConnell refused to take up the nomination.