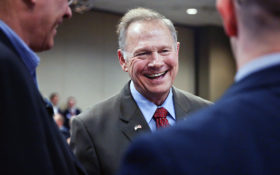 In a bombshell confession, one of Alabama Senatorial candidate Roy Moore’s accusers — Beverly Young Nelson — admitted during an ABC News interview that she forged a portion of the signature she presented as proof that Moore sexually assaulted her while underage.

Supporters of Moore welcomed the news, pointing to it as evidence that the Republican politician is innocent of the so-called “fake news” allegations against him.

Moore’s campaign has been on the defensive since The Washington Post reported claims that he assaulted a young woman and tried to date other teen girls in the 1970s and 1980s.

Moore was likely to win easily before the story, but the fallout has given Democrat Doug Jones a shot in Republican-controlled Alabama.

The Post quoted women claiming Moore pursued them when they were underage. Moore and his supporters claim the accusations are politically motivated.

“They’ve done everything. When I say they, who are they? They’re liberals. They don’t want conservative values,” Moore said at a recent campaign rally. “They’re socialists who want to change our way of life, putting man above God and that government is our God. They’re the Washington establishment who simply wants to keep their job!”

According to Fox News, “One of the women who accused Alabama Senate candidate Roy Moore of making advances on her when she was a teen and he a local prosecutor admitted Friday to forging part of the yearbook inscription she offered as proof.”

The media has been regularly attacking Moore’s campaign, and one liberal comedian — host of the ABC late-night show, Jimmy Kimmel Live!” — vowed to fist fight the Alabama politician.

Nelson confession that she forged part of the yearbook inscription she claimed Moore gave her — which she and her lawyer presented to the mainstream media as proof of her allegations — is a major blow to the case against Moore. It calls into credibility Nelson’s claims.

Moore has fiercely denied Nelson’s accusations, claiming he did not know her at the time of the alleged yearbook signing. Nelson’s story has been repeated by multiple other women. Moore, however, has said these are politically motivated lies put forward by the mainstream media.

Moore supporters claim Nelson’s allegations are revenge against the former Alabama judge, who ruled against her in a 1999 divorce case.

President Donald Trump has endorsed Moore’s campaign, and has urged voters to choose the conservative vote over his Democratic challenger —

LAST thing the Make America Great Again Agenda needs is a Liberal Democrat in Senate where we have so little margin for victory already. The Pelosi/Schumer Puppet Jones would vote against us 100% of the time. He’s bad on Crime, Life, Border, Vets, Guns & Military. VOTE ROY MOORE!

Given Moore’s fierce denial of the claims, this confession is sure to boost his credibility with voters.

Do you believe the accusations against Roy Moore?