Rod Rosenstein's job up in the air - The Horn News 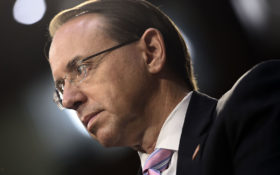 EDITORS NOTE: New information has come forward since the publication of this article that Rod Rosenstein decided not to resign Monday. He will meet with President Donald Trump on Thursday to discuss the future of his position. You can read the latest on this story here.

That’s according to Axios, who reported that Rosenstein is anticipating being fired by President Donald Trump and wanted to leave on his own terms.

The New York Times reported Friday that Rosenstein had “discussed recruiting cabinet members to invoke the 25th Amendment to remove Mr. Trump from office for being unfit.” Rosenstein firmly denied the story, and said the article was inaccurate because he was only joking with colleagues.

“He was hired by Jeff Sessions,” Trump said in a recent interview with Fox News on Sunday.

As for Rosenstein’s future, Trump said, “We will make a determination. It’s certainly a very sad story.”

With Rosenstein out of the picture, the future of special counsel Robert Mueller’s investigation becomes murky.

Trump has frequently dismissed the Mueller probe as a partisan “witch hunt” and has suggested ordering it to end.

That means the president will soon appoint a new overseer — and, at the risk of public backlash, Trump could pick a political ally that would kill the probe.