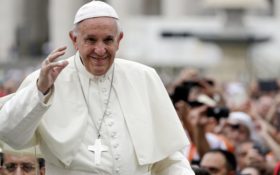 For Catholics around the world, the Lord’s Prayer is changing forever.

Pope Francis has declared a change to the prayer known to 2.2 billion Christians worldwide.

According to the papacy, the phrase “Lead us not into temptation” is a mistranslation from the original intention of the prayer. So Francis has decreed it will be changed to “do not let us fall into temptation.”

The original translation implies that it is God that pushes us into temptation; it’s Satan that pushes us, say Catholic authorities.

“I am the one who falls; it’s not him pushing me into temptation to then see how I have fallen,” Francis explained, according to a Fox News translation. “A father doesn’t do that, a father helps you to get up immediately. It’s Satan who leads us into temptation, that’s his department.”

Not everyone is a fan of the change.

“I was shocked and appalled,” Albert Mohler, president of The Southern Baptist Theological Seminary, told The Seattle Times. “This is the Lord’s Prayer. It is not, and has never been, the pope’s prayer, and we have the very words of Jesus in the New Testament. It is those very words that the pope proposes to change. It is not only deeply problematic, it’s almost breathtaking.”

&nbspSponsored: THIS takes the cake for the worst thing Obama has ever done

David Pao, an expert from the Trinity Evangelical Divinity School, was also critical.

Pao told The Christian Post that the new translation is incorrect because it’s ignoring the next line: “And deliver us from evil.”

“First, this ‘permissive’ reading is not explicitly expressed in … Matthew 6:13, and ‘lead us not into temptation’ remains the best and most natural rendering of this petition,” Pao.

“Second, if ‘temptation’ is understood as ‘temptation that leads to sin”, then it is important to emphasize that God does not lead people into such ‘temptation,'” Pao continued. “Nevertheless, the underlying Greek word behind ‘temptation’ can also refer more generally to ‘testing,’ and the Bible does describe God bringing His people into times of ‘testing.'”

The adapted Lord’s Prayer will be available “within months” in Catholic churches.

Vote here and share your opinion on this change —

How would you grade the changes to the Lord's Prayer?