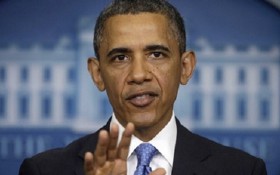 Is former President Barack Obama heading to prison? After intelligence insiders leaked there is “smoking gun” proof that the Obama administration wiretapped Trump Tower that is expected to be released “this week”, experts say there’s a possibility.

If this bombshell report contains proof that the former administration did illegally spy on President Donald Trump, it would mean the beginning of the end for Obama.

Sponsored Get this arthritis pain fighter before it requires a prescription

According to Fox News, insiders say the report contains a bombshell revelation that “is said to leave no doubt the Obama administration, in its closing days, was using the cover of legitimate surveillance on foreign targets to spy on President-elect Trump, according to sources.”

The sources went on to say that the intelligence information contains a paper trail that leaves only one explanation to the wiretapping: The Obama administration was actively using it to sabotage the incoming Trump administration.

The report is expected to be released as soon as this weekend.

Nunes added that he was “alarmed” that this sensitive information “ended up in reporting channels and was widely disseminated.”

Of course, while the news has some conservatives cheering, experts say they’re not certain Obama will end up behind bars.

While his harshest critics argue there’s more than enough to put him in handcuffs, experts agree there’s still a lot of investigation left — and it could take months.

What is certain, however, is that this report contains something big.

“What I’ve read seems to be some level of surveillance activity, perhaps legal, but I don’t know that it’s right and I don’t know if the American people would be comfortable with what I’ve read,” Nunes said.