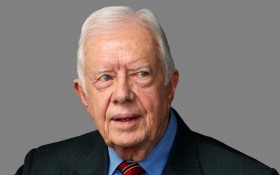 Former President Jimmy Carter spoke at a press conference early Thursday about his advancing cancer, the treatments available to him, and the details behind it.

At the conference, Carter announced that his cancer showed up in four small spots on his brain and he will immediately begin radiation treatment, saying he is “at ease with whatever comes.”

“I’m ready for anything and looking forward to a new adventure,” said Carter, appearing upbeat and making jokes as he openly talked about his cancer during a news conference.

“I just thought I had a few weeks left, but I was surprisingly at ease. I’ve had a wonderful life,” the 90-year-old Carter said. “It’s in God’s hands. I’ll be prepared for anything that comes.”

He didn’t give any prognosis, but spoke about receiving three months of treatments. Carter said the radiation will focus on the tumors in his brain, and he has already begun receiving a drug to boost his immune system.

His first radiation treatment was set for Thursday afternoon.

“It was the first time they’ve called me in a long time,” Carter said to laughter.

Carter was the nation’s 39th president, advancing as a virtual unknown on the national stage to defeat President Gerald Ford in 1976. But several foreign policy crises, in particular the Iran hostage crisis, crushed his bid for re-election and Ronald Reagan swept into the White House.

He said Thursday he still regretted not being able to rescue the hostages.