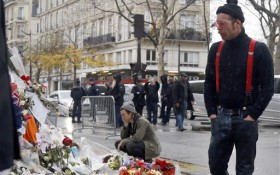 Geneva’s security department said that city authorities received word on Wednesday that Swiss federal authorities had flagged “suspicious individuals who could be in Geneva or the Geneva region.”

Police were also increasing their counterterrorism vigilance level, and were working with international and national authorities to locate the suspects, the statement said. It didn’t specify how many people were being sought or provide their identities.

Authorities were increasing police deployments in Geneva. The U.N. office in Geneva was also increasing its security precautions in connection with the enhanced measures by city police.

The Nov. 13 attacks on Paris, claimed by the Islamic State group, left 130 people dead and hundreds of others wounded. Salah Abdeslam, a fugitive suspected in the deadly attacks in Paris, is still at large. Several arrests were made in Belgium following the attacks.