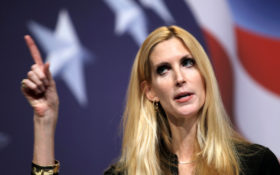 Conservative political commentator Ann Coulter has been forced to cancel her speech at the University of California Berkeley after threats of violence caused her conservative sponsors to revoke their support, leaving her no other choice.

“There will be no speech,” she told Reuters Wednesday of the speech scheduled for Thursday. “I looked over my shoulder and my allies had joined the other team.”

“It’s a sad day for free speech,” she told The New York Times.

The Berkeley College Republicans, a group of students who originally extended the invitation to Coulter, also backed down to the threats, claiming that the environment has become too hostile.

Coulter has been in a days long argument with the school after they canceled her scheduled speech citing violent threats and a lack of accommodations.

The university attempted to reschedule Coulter for the following week, but she wasn’t fooled by their strategic change of date to a time when classes wouldn’t even be in session.

She originally stood up for free speech, saying she would speak in public space if the university would not supply her with a venue. But after being abandoned by the group sponsoring her, Coulter was forced to cancel.

The school erupted in violence in February when conservative speaker Milo Yiannopoulos was scheduled to speak, but the school also canceled his event.

Berkeley was ironically known for its open platform for free speech and tolerance during the 1960s Free Speech movement, but is quickly becoming known as the birthplace of the modern day “anti-free speech movement.”

Even prominent liberals are condemning the suppression of expression at Berkeley.

Senator Bernie Sanders told The Huffington Post, “people have a right to five their two cents worth, give a speech, without fear of violence and intimidation.”

And Coulter found another unlikely ally in Elizabeth Warren, who told CNN’s Jake Tapper, “My view is, let her speak and don’t show up. If you don’t like it just don’t show up.”

But violence and intimidation has won in a tragic loss for free speech and constitutional rights.