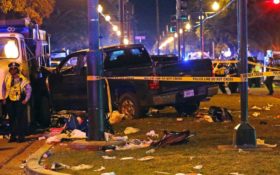 Tragedy just struck Alabama after another runaway car plowed into a crowd of innocent people celebrating Mardi Gras on Tuesday.

“A car drove into a crowd of people before the start of the parade in Gulf Shores, Ala. The Gulf Shores High School marching band was in the area of the crash,” according to local station WAAY.

“A city spokesperson says there were eleven band members injured in the crash. Three of the band members are in critical condition.”

The accident comes just days after a similar accident Saturday in New Orleans. The man who allegedly plowed into a crowd enjoying a parade had a blood alcohol level nearly three times the legal limit, police said Sunday.

The New Orleans Police Department issued a statement identifying the man as 25-year-old Neilson Rizzuto. He’s being held at the city’s jail on charges of first-degree negligent vehicular injuring, hit-and-run driving causing serious injury and reckless operation of a vehicle.

The accident happened Saturday during one of the busiest nights of Mardi Gras when thousands of people throng the streets of Mid-City to watch the elaborate floats and clamor to catch beads and trinkets tossed from riders.

Police said Sunday that 28 people were hurt in the accident that sent 21 people to the hospital; an additional seven people at the scene declined medical help. At least three victims remained hospitalized overnight with moderate to serious injuries, police said Sunday. There were no fatalities.