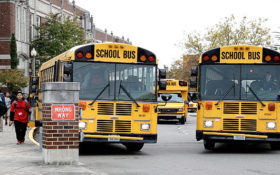 Officials say a 14-year-old high school student has been taken into custody after shooting a classmate at their high school in the California city of Palmdale.

Los Angeles County sheriff’s Capt. Darran Harris tells KTTV Friday that the student was taken into custody and a gun was recovered at the scene.

He says one student was shot in the arm and the shooting stemmed from a dispute between the shooter and the victim. He didn’t elaborate. The injured student is expected to make a full recovery.

Harris says the school is safe but remains on lockdown as officials worked to reunite students with their parents.