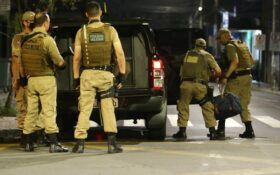 A large gang of heavily armed bank robbers invaded the Brazilian city of Cameta just one day after a similar force struck another mid-sized city on the opposite side of the country, taking residents hostage as they looted a bank.

Para state’s public security secretariat said in a statement Wednesday that more than 20 criminals with assault rifles attacked a branch of the state-run Bank of Brazil in the city in the Amazon region overnight.

Neither the bank nor officials immediately said how much money might have been stolen.

Video on social media showed a line of roughly a dozen hostages being led away from a square in Cameta, a city of 140,000 people, and shots ringing out in the night. Local media reported that a military police station was attacked, preventing officers from responding.

“They drove around shooting at the police and at the houses. It was a horrible scene to see,” said Junior Gaia, who lives nearby, in an interview with television network Globo News. “We were all laid out on the floor, afraid they would invade the homes.”

The coordinated attack came a day after a similar overnight robbery of a Bank of Brazil branch in Brazil’s southern region. In the city of Criciuma, dozens of gunmen armed with assault rifles seized the city and took hostages as they used explosives to rob a bank.

As in Cameta, they took actions to impede police response and fired shots into the air, apparently to scare people and keep them at home.

The robberies took place at the start of December, when bank coffers are filled in anticipation of employees withdrawing their year-end bonuses, according to Cássio Thyone, a council member of the non-profit Brazilian Forum on Public Safety. Many Brazilians get an extra month’s salary paid out in December, known as the 13th salary.

“It doesn’t happen without planning,” Thyone told the Associated Press by phone. “It’s another demonstration that everything is planned. They think of the location, and the timing.”

Bank of Brazil said in a statement that it is collaborating with police investigations, and has yet to begin evaluating the structural damage to its branch. Images published by online media outlet G1 showed the facade blown open and shards of glass littering the ground.

In Cameta, tactical forces as well as police from other areas were dispatched to reinforce the police. Authorities located the criminals’ abandoned truck and found explosive devices within it, according to the security secretariat.

Two people were shot, including one hostage, a young man, who was killed. The other has been hospitalized with a leg wound.

Cameta Mayor Waldoli Valente offered his condolences for the victim on Facebook.

“Our city was always peaceful and I ask that everyone stay at home,” he posted about 2:30 a.m. Wednesday.