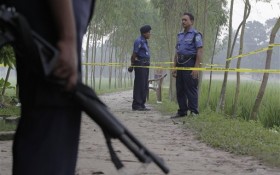 Is the Islamic State bringing its war against Christianity to southeast Asia? That’s what reports claims after a Bangladeshi pastor has survived an attempt on his life by three men who came to his home pretending to want to learn about Christianity, police and the victim said Tuesday.

The incident follows the fatal attacks on two foreigners last week in Bangladesh, a predominantly Muslim country that is grappling with violence claimed by hard-line Islamic groups.

The Islamic State group said it was responsible for last week’s attacks.

On Monday, the Rev. Luke Sarker, 52, suffered injuries when three men attacked him with a knife at his home in the northwestern district of Pabna, police official Siddikur Rahman said.

Sarker, the pastor of Faith Bible Church, said by telephone that the men had phoned him about two weeks ago saying they wanted to visit him to learn about Christianity.

After they arrived at his home on Monday, the men suddenly attacked him with a knife and tried to slit his throat, Sarker said. But as he shouted, his wife came to his rescue and the men fled. Police later recovered a motorbike from outside his home.

Rahman said police had no clues yet about the identities of the three men but suspect they are members of a fundamentalist group.

Biplob, Hira and three others were detained soon after the killing but were not initially named as suspects. The others are still being questioned but so far are not considered suspects, Karim said.

Hira owned a fishery near the farm where Hoshi was producing high-yielding grass as cattle feed and had helped the Japanese man lease the land he was farming, Karim said.

The Islamic State group issued a statement claiming responsibility for that attack, according to the SITE Intelligence Group, which monitors jihadi postings online. The report could not be independently confirmed. The Islamic State also claimed responsibility for the Sept. 28 killing of Italian aid worker Cesare Tavella in Dhaka, Bangladesh’s capital.

Bangladeshi Home Minister Asaduzzaman Khan rejected those claims. The government has blamed the country’s main opposition Bangladesh Nationalist Party and its key ally, Jamaat-e-Islami, for the attacks, accusing the groups of trying to destabilize the country. A spokesman for the BNP denied the allegations.

Bangladesh has been struggling in recent months with a rise in violence claimed by hard-line Islamic groups, banning several that have been blamed for killing four bloggers this year.