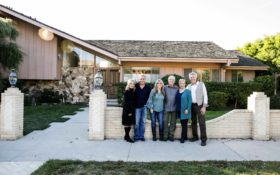 Six cast members of “The Brady Bunch” gathered Thursday in Los Angeles at the home that was featured in the opening and closing of the sitcom. HGTV purchased the home in the Studio City neighborhood in Los Angeles for its new series, “A Very Brady Renovation.”

Maureen McCormick, who played Marcia, along with Barry Williams, Christopher Knight, Eve Plumb, Mike Lookinland and Susan Olsen walked through the two-bedroom dwelling. The interior layout does not resemble what was featured on the show, which ran from 1969 to 1974. Interior scenes were shot in a studio.

HGTV plans to expand the home without compromising its street view and reimagine the show’s interior design.

The program is set to premiere in September 2019.