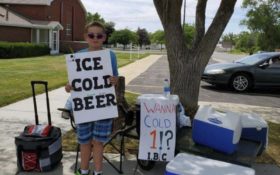 A Utah boy has earned widespread social media attention for his neighborhood soda stand thanks to a sign he holds that reads, “Ice Cold Beer” with “root” above the word beer in tiny print.

Officers that went to check it out realized that it was just a clever marketing ploy and posted pictures of 11-year-old Seth Parker on Facebook with the comment, “a twist on a lemonade stand.”

Sen. Mitt Romney, of Utah, tweeted a picture of Seth with the comment, “A lesson in reading the fine print! The future is bright for this young Utah entrepreneur.”

Seth’s mother Alexis Parker said Thursday that the family is dumbfounded and excited by all the attention. She estimated that some 60 people a day come to the stand.

Seth started the stand because his parents urged him to get out more after they noticed he had struggled to make new friends since the family moved from Georgia last year, Alexis Parker said.

Seth thought about a yard sale or lemonade stand but settled on selling the soda because he is a root beer “fanatic,” she said. He chose the sign with the tiny print as a little “wise crack.”

The first day brought some scoffs and scowls, especially for people without good vision, she said.

But people soon caught on to the joke.

“We’re loving people stopping by and just having a good laugh,” said Alexis Parker. “It is a joy all the way around.”