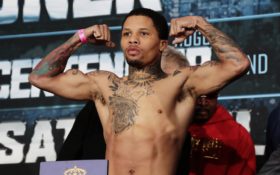 A Baltimore boxer who’s the World Boxing Association champion in the 130-pound (58.9-kilogram) category is accused of assaulting someone at a shopping mall near Washington.

News outlets report Fairfax County police announced Tuesday that a warrant had been issued for Gervonta Davis. Lt. John Lieb says the misdemeanor assault warrant is based on sworn testimony from the alleged victim in the Feb. 17 incident.

Lieb says police have made multiple attempts to contact the boxer by telephone, but haven’t received a response. Police say the 24-year-old started a confrontation and then assaulted the unidentified man near an ATM at Tysons Galleria.

A representative for Davis said he had no immediate comment, but the super featherweight addressed a TMZ Sports report about the incident by tweeting: “Lies lies lies.”