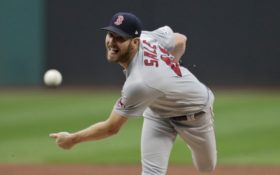 Sale entered Tuesday’s game against the Indians with 1,995 strikeouts. He struck out the side in the first and reached the milestone in the third when he fanned rookie Oscar Mercado.

Sale has struggled this season. He entered his 25th start at just 6-11 with a 4.41 ERA. Still, he has the best strikeout-to-walk ratio in the majors since 1920.

The 30-year-old is in his third season with Boston after spending seven with the Chicago White Sox. He opened 2019 with four straight losses and didn’t get his first win until May 3.