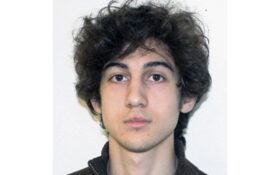 The justices, by a 6-3 vote Friday, agreed with the Biden administration’s arguments that a federal appeals court was wrong to throw out the sentence of death a jury imposed on Tsarnaev for his role in the bombing that killed three people near the finish line of the marathon in 2013.

“Dzhokhar Tsarnaev committed heinous crimes. The Sixth Amendment nonetheless guaranteed him a fair trial before an impartial jury. He received one,” Justice Clarence Thomas wrote for the majority, made up of the court’s six conservative justices.

The court reversed the 1st U.S. Circuit Court of Appeals in Boston, which ruled in 2020 that the trial judge improperly excluded evidence that could have shown Tsarnaev was deeply influenced by his older brother, Tamerlan, and was somehow less responsible for the carnage. The appeals court also faulted the judge for not sufficiently questioning jurors about their exposure to extensive news coverage of the bombing.

In dissent for the court’s three liberal justices, Justice Stephen Breyer wrote, “In my view, the Court of Appeals acted lawfully in holding that the District Court should have allowed Dzhokhar to introduce this evidence.”

Breyer has called on the court to reconsider capital punishment. “I have written elsewhere about the problems inherent in a system that allows for the imposition of the death penalty … This case provides just one more example of some of those problems,” he wrote in a section of his dissent his liberal colleagues, Justices Elena Kagan and Sonia Sotomayor, did not join.

The prospect that Tsarnaev, now 28, will be executed anytime soon is remote. The Justice Department halted federal executions last summer after the Trump administration carried out 13 executions in its final six months.

President Joe Biden has said he opposes the death penalty, but his administration was put in the position of defending Tsarnaev’s sentence at the Supreme Court.

Had Tsarnaev prevailed at the high court, the administration would have had to decide whether to pursue a new death sentence or allow Tsarnaev to serve out the rest of his life in prison.

Tsarnaev’s guilt in the deaths of Lingzi Lu, a 23-year-old Boston University graduate student from China; Krystle Campbell, a 29-year-old restaurant manager from Medford, Massachusetts; and 8-year-old Martin Richard, of Boston, was not at issue, only whether he should be put to death or imprisoned for life.

Tsarnaev was convicted of all 30 charges against him, including conspiracy and use of a weapon of mass destruction and the killing of Massachusetts Institute of Technology Police Officer Sean Collier during the Tsarnaev brothers’ getaway attempt. The appeals court upheld all but a few of his convictions.

Two people who were seriously injured in the bombing and its aftermath praised Friday’s outcome on Twitter.

“Congratulations to all who worked tirelessly for justice,” wrote Adrianne Haslet, a professional ballroom dancer who lost a leg in the attacks.

Dic Donohue, a Massachusetts transit police officer who was critically wounded in a firefight with the two marathon bombers, tweeted: “Bottom line: He can’t kill anyone else.”

The main focus at high court arguments in October was on evidence that implicated Tamerlan Tsarnaev in a triple killing in the Boston suburb of Waltham on the 10th anniversary of the Sept. 11, 2001, terrorist attacks. The evidence bolstered the defense team theory that Dzhokhar Tsarnaev was indoctrinated and radicalized by his older brother.

The trial judge had rejected that argument, ruling that the evidence linking Tamerlan to the Waltham killings was unreliable and irrelevant to Dzhokhar’s participation in the marathon attack. The judge also said the defense team’s argument would only confuse jurors.

One problem with the evidence about the Waltham killings was that both Tamerlan Tsarnaev and Ibragim Todashev, who implicated him, were dead by the time of the trial.

Tamerlan Tsarnaev, 26, had been in a gunfight with police and was run over by his brother as he fled, hours before police found a bloodied and wounded Dzhokhar Tsarnaev cowering in the Boston suburb of Watertown.

Todashev was interviewed by investigators after the marathon attack. He told authorities that Tamerlan recruited him to rob the three men, and they bound the men with duct tape before Tamerlan slashed their throats to avoid leaving any witnesses.

In a bizarre twist, while Todashev was being questioned in Florida, he was shot dead after authorities say he attacked the agents. The agent who killed Todashev was cleared of any criminal wrongdoing.

Given the circumstances, Thomas wrote, U.S. District Judge George O’Toole Jr. can’t be faulted for excluding Todashev’s account because “no matter how Dzhokhar presented the evidence, its bare inclusion risked producing a confusing mini-trial where the only witnesses who knew the truth were dead.”