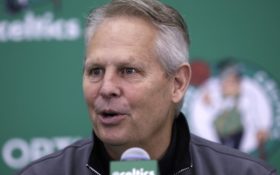 Boston Celtics President Danny Ainge had a mild heart attack and is expected to fully recover.

The 60-year-old executive received immediate medical attention Tuesday night in Milwaukee, the team said in a statement Thursday. The Celtics were facing the Bucks in the second round of the playoffs. Ainge, who also had a mild heart attack in 2009, was scheduled to return to Boston.

Celtics coach Brad Stevens said after the team practiced Thursday that he’s been in frequent communication with Ainge’s family. He said they all seem to be doing well.

“That’s all positive, but certainly it’s scary,” Stevens said. “To me, he’s a friend and the family’s been so good to us. So, you don’t even think about anything else. You just want him to be comfortable and feeling great, getting better, that it’s a good prognosis.”

Game 3 of the Celtics’ series with the Bucks is Friday night in Boston.

Stevens’ comments were echoed by Celtics guard Marcus Smart, who said the team was informed by the coaching staff before practice Thursday. Now in his fifth season in Boston, Smart is the longest-tenured player on the roster.

Smart shares a close relationship with Ainge, who was there to comfort him while his mother, Camellia Smart, endured and eventually died from cancer last year.

“Danny is just one of those guys. He takes time out of his life and his day, whatever he’s doing and his schedule, to make sure you’re all right,” Smart said. “He constantly checks in on my family and everything like that. Just personally for me he’s been like another mentor for me.

“From when I first got here Danny was that person I seen every day. … He means a lot to my life as well. I just hope he makes a speedy recovery.”

Ainge was a two-sport star at BYU who in 1981 won the Wooden Award as the nation’s top college basketball player. He played parts of three seasons with the Toronto Blue Jays, batting .269, before settling into a 14-year career in the NBA.

Ainge was an All-Star in 1988 and won two championships with the Celtics alongside Larry Bird, Robert Parish and Kevin McHale.

Ainge coached the Phoenix Suns for three-plus seasons and took over the Celtics’ basketball operations in 2003. He was named NBA executive of the year in 2008 after engineering the deals for Kevin Garnett and Ray Allen that helped the Celtics raise their record 17th championship banner.