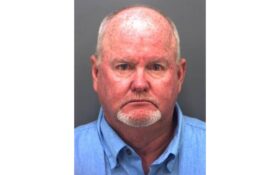 One of two Texas brothers who authorities say opened fire on a group of migrants getting water near the U.S.-Mexico border, killing one and injuring another, was warden at a detention facility with a history of abuse allegations.

The shooting happened Tuesday in rural Hudspeth County about 90 miles (145 kilometers) from El Paso, according to court documents filed Thursday. One man was killed; a woman was taken to a hospital in El Paso where she was recovering from a gunshot wound in her stomach, according to the Texas Department of Public Safety.

DPS said the victims were among a group of migrants standing alongside the road drinking water out of a reservoir when a truck with two men inside pulled over. According to court documents, the group had taken cover as the truck first passed to avoid being detected, but the truck then backed up. The driver then exited the vehicle and fired two shots at the group.

Witnesses from the group told federal agents that just before hearing the gunshots, they heard one of the two men in the vehicle yell derogatory terms to them and rev the engine, according to court documents.

Authorities located the truck by checking cameras and finding a vehicle matching the description given by the migrants, according to court records.

Michael Sheppard and Mark Sheppard, both 60, were charged with manslaughter, according to court documents. Court records did not list attorneys for either man. Contact information for them or for their representatives could not be found and attempts to reach them for comment since their arrest have been unsuccessful.

Records show that Michael Sheppard was warden at the West Texas Detention Facility, a privately owned center that has housed migrant detainees. A spokeswoman for U.S. Immigration and Customs Enforcement told The Associated Press that no ICE detainees had been held at that detention facility since October 2019, following the opening of a larger detention facility nearby.

Scott Sutterfield, a spokesman for facility operator Lasalle Corrections, responded to an AP email asking whether Sheppard had been fired as warden. Sutterfield said the warden had been fired “due to an off-duty incident unrelated to his employment.” Sutterfield declined further comment, citing the “ongoing criminal investigation.”

A 2018 report by The University of Texas and Texas A&M immigration law clinics and immigration advocacy group RAICES cited multiple allegations of physical and verbal abuse against African migrants at the facility. According to the report, the warden “was involved in three of the detainees’ reports of verbal threats, as well as in incidents of physical assault.” The warden cited in the report was not named.

However, Texas Congressman Lloyd Doggett, a Democrat, said in a press conference Saturday that Sheppard was in fact the warden at the facility at the time of the allegations and when the report was published. According to information provided by Doggett’s office, the webpage for Louisiana-based LaSalle Corrections listed Sheppard as an employee at West Texas since 2015.

Doggett, along with other Texas Democratic congressmen, called on Saturday for a federal investigation into the shooting.

“The dehumanizing, the demeaning of people who seek refuge in this country, many of whom are people of color, is what contributed to the violence we see here,” Doggett said.

In one account detailed in the report, a migrant told the lawyers that the warden hit him in the face while at the nurse’s station and when he turned to the medical officers he was told they “didn’t see anything.”

“I was then placed in solitary confinement, where I was forced to lie face down on the floor with my hands handcuffed behind my back while I was kicked repeatedly in the ribs by the Warden,” a migrant referred to as Dalmar said in the report.

The attorneys submitted a civil rights complaint over the allegations that year but according to response letter sent to the lawyers in 2021, the Department of Homeland Security Office for Civil Rights and Civil Liberties conducted an onsite investigation, made multiple recommendations to ICE, but did not find evidence of “any excessive use of force incidents” or “incidents of wrongful segregation” and found some uses of force to have been appropriate.

Fatma Marouf, a co-author of the report and director of the Immigrant Rights Clinic at Texas A&M, said it was difficult for authorities to follow up on the allegations because many of the people interviewed for the report were deported shortly after.

Marouf said current views on immigration enforcement based in deterring people at all costs have “spiraled out of control.”

“We don’t even see people as humans anymore,” Marouf said.

The number of Venezuelans taken into custody at the U.S.- Mexico soared in August, while fewer migrants from Mexico and some Central American countries were stopped, officials said earlier this month. Overall, U.S. authorities stopped migrants 203,598 times in August, up 1.8% from 199,976 times in July but down 4.7% from 213,593 times in August 2021.

Silky Shah, executive director of advocacy organization Detention Watch Network, said this is both a problem of the current rhetoric around immigration, including the use of terms like “invasion” by GOP leaders including Texas Gov. Greg Abbott and inaction from federal officials to move away from the previous administration’s immigration policies that added to this sentiment.

“I think there is no question that there is a discourse that is stoking actions like this,” Shah said.