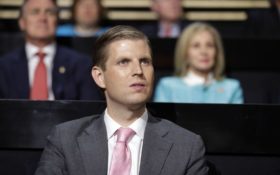 New York Mayor Bill de Blasio’s latest attempt to grab some easy headlines backfired in a big way when when Eric Trump – son of President Donald Trump – unloaded on him in an epic series of tweets.

The merciless “truth bomb” humiliated the leftist mayor by pointing out ALL of his biggest failures at once.

And it happened smack in the middle of what was supposed to be the greatest week of his political career after he announced that he’s running for president.

Days before that yawn-inducing 2020 announcement, de Blasio held an event INSIDE Trump Tower in a botched attempt to call out the family company for its environmental record.

If he wanted attention, he sure got it… but it was the wrong kind, because not only was the event rocked by protesters, it also called attention to his many shortcomings as mayor of the nation’s largest city.

That’s where Eric Trump stepped in – and unloaded on de Blasio in a series of tweets that called him out for attacking a private business that employs thousands in the city to score cheap political points.

When the mayor replied with a childish “spare me,” Trump fired back with a single tweet that summed up the deteriorating quality of life now facing New Yorkers:

Spare me? First you have never created a job in your life. Second, our great city has gone to shit under your leadership. Crime is up, the men & women of the NYPD detest you, homelessness is rampant, our streets are dirty and people are leaving our city in record numbers. https://t.co/3Fn1glQJEa

Trump Jr. added that the mayor was likely too busy visiting primary states to see how bad conditions were becoming in New York.

“I look forward to his presidential run being even less successful than his time as mayor,” he wrote, then added: “If that’s even possible.”

And one of de Blasio’s predecessors, former New York Mayor Rudy Giuliani, lamented the wreckage of his once-proud city.

“It is painful to see the quality of life, in the city I love, deteriorate,” Giuliani wrote.

In a bipartisan tip of the cap, he gave credit to Mayor Michael Bloomberg for preserving that quality of life, and for handing de Blasio a city that was well-run and well-maintained.

“It took awhile for him to ruin it but now everyone sees it and comments on it,” Giuliani wrote. “It’s a shame.”

Not exactly the best way to kick off a presidential campaign.

Then again, he’s not exactly the best candidate. Of the two dozen announced so far, de Blasio has come in at or near the very bottom in every poll. Statistically, he has hit ZERO percent in many of them, and has never risen above 1 percent, according to the 538 collection of polls for the 2020 campaign season.

No one wants him to run.

Even in New York City, where his support should be highest, 76 percent said he SHOULDN’T run for president.

His decision to do so anyway is being greeted with mockery and jeering, including an only-in-New York moment right outside the mayor’s home detailed on Twitter by NY1 political reporter Grace Rauh:

Outside Gracie Mansion just now, woman runs by and shouts, “Don’t do it, Bill!”
Me: “He’s doing it”
Jogger: “I can’t believe it. Nobody wants it.”

In another case, a passerby reeled-in for an on-the-street interview with MSNBC asked: “Is that a joke?”

When told it wasn’t, the passerby laughed and laughed.

Even worse, when de Blasio announced his candidacy in a national TV interview on ABC’S “Good Morning America,” protesters outside chanted “LIAR!” so loudly that it could be heard inside the studio.

And in the final indignity, one of his own hometown newspapers laughed at him, too… right on the front page: