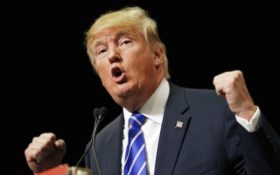 If President Donald Trump’s press conference Thursday was a boxing match, it would’ve been a brutal knockout.

Trump laid into the dishonest media with quick wit and quickly established this was different than anything the mainstream was used to.

No more Mr. Nice Guy. This was a no-holds-bar attack from Trump. The president slammed CNN and other mainstream networks for their shameful bias, destroyed liberal media reports that his campaign advisers had inappropriate contact with Russian officials, and vowed to crack down on the leaking of classified information.

Nearly a month into his presidency, Trump also said in the White House news conference that his new administration had made “significant progress” and took credit for an optimistic business climate and a soaring stock market.

“This administration is running like a fine-tuned machine,” Trump declared. He said he would announce a “new and very comprehensive [executive] order to protect our people” that will replace the previous travel ban being tied up by liberal lawsuits.

Throughout the news conference in the East Room of the White House, the new president didn’t hold back. He delivered repeated criticism of the news media, accusing it of being “out of control” and promising to take his message “straight to the people.”

He dismissed recent reports in The New York Times and CNN that Trump campaign aides had been in contact with Russian officials before his election. Trump called Paul Manafort, his former campaign manager who has ties to Ukraine and Russia, a “respected man.”

Trump called the reports a “ruse” and said he had “nothing to do with Russia.” Trump added, “Russia is fake news. This is fake news put out by the media.”

Amid reports of widespread leaks within his administration, Trump also warned that he would clamp down on the dissemination of sensitive information, saying he had asked the Justice Department to look into the leaks. “Those are criminal leaks,” adding, “The leaks are real. The news is fake.”

Trump, who was elected as an outsider intent on change, opened the hastily arranged news conference with a stinging rebuke of corporate media. He accused reporters of not telling the truth and only serving special interests.

“The press has become so dishonest that if we don’t talk about it, we are doing a tremendous disservice to the American people,” Trump said.

The president said his ousted national security adviser, Michael Flynn, was “just doing his job,” but said he was “not happy” with how information about Flynn’s phone call to a Russian diplomat was relayed to Vice President Mike Pence.

But Trump said what Flynn did “wasn’t wrong” and said he had identified a strong replacement for Flynn, which made the decision to let him go easier.

Trump is said to favor Vice Admiral Robert Harward, a former Navy SEAL, as his next national security adviser, according to a White House official. Harward met with top White House officials last week and has the backing of Defense Secretary Jim Mattis. He is slated to meet with officials later Thursday.
—
Sponsored: The best arthritis pain relief available [no prescription needed — for now]

Earlier in the day, Trump had a breakfast meeting with some of his staunchest House supporters.

The White House has said Trump asked for Flynn’s resignation because he had misled Vice President Mike Pence over his dealings with Russia and whether he had discussed sanctions with Russia’s ambassador to the U.S. before Trump’s Jan. 20 inauguration. Flynn previously had denied those conversations to Pence and other top officials.

On Thursday, he warned in a pair of tweets that “low-life leakers” of classified information will be caught. As journalists were being escorted out of the breakfast meeting, Trump responded to a reporter’s question on the subject by saying: “We’re going to find the leakers” and “they’re going to pay a big price.”