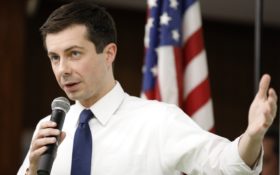 Mayor Pete Buttigieg is taking Democratic politics by storm, rising from “nobody” status to the hottest thing on the talk-show circuit in a matter of weeks.

On paper, the mayor of South Bend, Indiana, is a liberal dream come to life.

Buttigieg is a veteran who served in Afghanistan and speaks seven languages. He’s a Harvard graduate and a Rhodes scholar. He’s young, articulate and comes across as both smart and pleasant.

But for someone who wants to run the country, there’s really only ONE test that matters most… and it’s not his service in the combat zone, languages or education.

It’s his TRACK RECORD in South Bend, where he’s served as mayor for seven years.

“I’m not going around saying we’ve fixed every problem we’ve got,” the 37-year-old admitted in an interview with The Associated Press. “But I’m so proud of what we’ve done together.”

Running a city of just 100,000 people should be easy-peasy compared to running a nation of nearly 330 million.

But if that’s his first test… it’s one he’s already FLUNKED!

A report in The Washington Examiner finds South Bend is bleeding jobs and money to the smaller nearby city of Elkhart. And some of Buttigieg’s biggest initiatives – true tests for anyone with an eye on higher office – have flopped spectacularly.

In one case, the Examiner said, Buttigieg attempted to create a “Silicon on the prairie” area focused on tech. But that zone, the newspaper reported, actually LOST 2,700 jobs.

The city is also falling short in two key areas of importance to all Americans: money and crime.

City Data reports that 1 in 4 residents in South Bend live below the poverty line, far higher than the 14 percent rate statewide.

Even more alarming, the per capita income in the city is 34 percent lower than the national average.

The Guardian reports that the city is plagued by violent crime, which has been rising in the city since Buttigieg first took office in 2012.

“He pays a lot of attention to infrastructure but seems to ignore the fact we’ve still got quite a bit of violence in South Bend,” resident Phil Gallam told the newspaper. “I’m in the midst of a job search and there hasn’t been much at all. I haven’t noticed many opportunities around here.”

One reason he can’t find a job: Gallam is a digital product designer and – as the Examiner noted – tech has been having a tough time in South Bend. So has manufacturing, one of the leading sources of good-paying jobs in the region.

Instead, much of the job growth in South Bend has been in the service industry, essentially more hotel and dining options for visitors to nearby University of Notre Dame.

“South Bend is more of a service-based economy now. The expansion into service jobs means of these jobs are mostly low-paying,” Indiana University School of Business professor Hong Zhuang told the Examiner. “From the data, it seems to me that manufacturing jobs would provide much better incomes for residents.”

That’s his record, which is bad enough.

What’s even worse is his far-left positions on the biggest issues of the day: He supports a “Medicare for All” plan that would bankrupt the nation and crush the economy, stricter gun control, the outrageously expensive “Green New Deal” and re-entering the radically unfair Paris Climate Accord that held the United States to a far stricter standard than other nations.

Americans already made themselves clear on all of those issues when they voted for Trump in 2016.

America will make its choice clear again if Mayor Pete is the Democrats’ 2020 nominee.