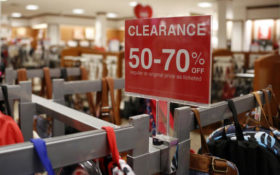 A discarded security tag has caused a scare in downtown Atlanta.

An employee reported a beeping sound coming from a trash bin outside a state government building in the heart of downtown Friday. Police evacuated the building and summoned bomb technicians.

As a search was underway, a woman who worked in the building told officers she knew what was in the bin.

The woman said a pair of shoes she bought online came with a security tag attached. When she cut it off, it began to beep. She tossed the tag in the bin on her way into work.

The state Department of Public Safety said in a news release that the trash bin was cleared before employees were given the “all clear” and allowed to return to the building.