Bomb explodes outside of national news station - The Horn News 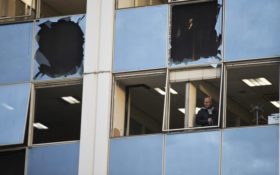 A powerful bomb exploded early Monday outside the southern Athens headquarters of Greece’s private Skai broadcaster, which has been strongly critical of government policies, damaging the glass-fronted building but causing no injuries.

There was no immediate claim of responsibility for the bombing, which resembled attacks by domestic extreme left-wing and anarchist groups, whose past targets have included media groups.

Greece’s left-led government, which has harshly and repeatedly criticized Skai for its perceived anti-government bias, strongly condemned the bombing.

Prime Minister Alexis Tsipras issued a statement condemning the “attack by cowardly and dark forces against democracy itself.”

“I express my frank solidarity with the broadcaster’s journalists and employees,” he added.

Police said the blast occurred at 2:35 a.m. outside the Skai TV and radio building — where the respected Kathimerini newspaper is also housed — after telephoned warnings to a news website and another TV station prompted authorities to evacuate the building.

The attackers escaped undetected after planting the bomb, which detonated 45 minutes after the warning calls. Police, who were checking cameras in the area for possible clues on the bombers, said the device had contained at least five kilograms of explosives.

“This was a strike against democracy. Thankfully, there was only material damage — it’s a relief that no one was hurt — following the swift action taken by the police,” Public Order Minister Olga Gerovasili said.

She said anti-terrorism police are leading the investigation.

Skai said it had warned authorities, to no avail, that it had been receiving threats.

It also linked the attack with the strong criticism Skai had been receiving from the government, which has banned its officials from appearing on Skai broadcasts to protest reporting that the government sees as biased against it.

“Government officials and propaganda mechanisms have rendered our station a target,” a Skai statement said. “Following today’s dramatic development they must understand the weight and full extent of their incendiary comments.”

The blast shattered windows and damaged the front of the building, and tore through front offices. Nearby apartment buildings and cars were also damaged.

The explosive device was attached to a metal crash barrier on a busy coastal road in the southern Faliro area. Dozens of police investigators wearing white coveralls collected evidence from the scene, much of which remained cordoned off.

Journalist Nikos Filippidis arrived for work after the building was partially reopened.

“There are people who work here for the press, to inform the public,” he said. “The damage will be fixed, but this feels like violence inside someone’s home.”

Monday’s attack bore some similarities with a Dec. 22, 2017, bombing of a courthouse building in central Athens. That attack was claimed by a far-left group called Popular Fighters Group.

Greece has a history of armed attacks over the past four decades, mostly from radical far-left groups that began to emerge after a seven-year dictatorship that collapsed in 1974.

Targets frequently include banks and embassies, as well as police and judicial sites.