Bloomberg registers for Democrat ballot in Arkansas - The Horn News 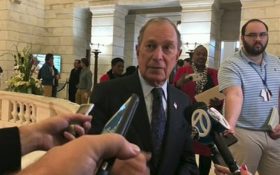 Bloomberg sent staffers to Alabama last week to file for the primary there, but filed his paperwork in person in Arkansas two hours before the state’s deadline.

“We’re getting closer” to making a decision, Bloomberg told reporters after filing paperwork at Arkansas’ Capitol.

He’s moving toward a presidential bid as he warns that the current field of Democratic presidential candidates isn’t equipped to defeat President Donald Trump next year. If he runs, Bloomberg plans to skip campaigning in the traditional early voting states and focus more on Super Tuesday states, including Arkansas and Alabama.

Bloomberg has rebuffed criticism from his potential rivals that his candidacy would amount to buying the election, saying self-financing his campaign means he wouldn’t be beholden to anyone.

“I’m going to finance the campaign, if there is one, with my own money so I don’t owe anybody anything,” he said. “Other people ask for donations in return for which they’ve got to give favors. But it costs a lot of money, whether you’re doing it with your own money or somebody else’s money, to get a message out.”

Bloomberg also promised to support whoever wins the Democratic nomination.

“That is a very easy thing to say yes, given who the Republican candidate is going to be,” Bloomberg said.

Bloomberg filed to run in a state that had once been a Democratic stronghold in the South, but turned solidly red over the past decade. Republicans hold all of Arkansas’ seats in Washington, its statewide offices and both chambers of the Legislature. Lawmakers this year moved the state’s primary up from May to attract more attention from presidential hopefuls.

Bloomberg’s appearance in Little Rock raised hopes from state Democrats that Arkansas will play a greater role in the nominating contest, especially with a crowded field.

“I think they realize when we start counting delegates, if this thing is jumbled up going into Super Tuesday, every state’s in play,” state Democratic Party Chairman Michael John Gray said.