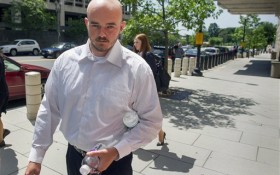 A former Blackwater Worldwide security contractor found guilty for his role last year in a deadly Baghdad shooting has appealed his murder conviction.

Nicholas Slatten argues in an appeal filed Monday that the Justice Department’s prosecution of him was “vindictive” and that prosecutors were “determined to win at all costs.”

Slatten and three other Blackwater guards were found guilty in 2014 after a months-long trial arising from the September 2007 killing of unarmed civilians in Baghdad’s Nisoor Square.

Slatten’s appeal raises multiple legal arguments, including that the jury didn’t have enough evidence to find him guilty of murder. It also says a key witness who testified against him at trial later changed his story.

The other guards on Monday appealed their manslaughter convictions.