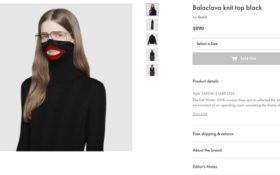 Gucci has apologized after complaints that a wool sweater with an oversized collar designed to cover the face resembled blackface makeup, and said the item had been pulled from its online and physical stores.

In a statement posted on Twitter on Wednesday, Gucci said it was committed to diversity and considered it a “fundamental value to be fully upheld, respected and at the forefront of every decision we make.”

The turtleneck black wool balaclava sweater, which sells for $890 on one site, covers the nose and includes a red cut-out for the mouth. It was ridiculed on social media as insensitive and racist, at a time when the U.S. is grappling with cases of old photos of politicians with their faces blackened.

“Gucci deeply apologizes for the offense caused by the wool balaclava jumper,” Gucci said, adding that it intended to turn the incident “into a powerful learning moment for the Gucci team and beyond.”

In December, Italian designer Prada said it was no longer selling a line of accessories that featured a character with brown skin and exaggerated red lips after complaints they resembled blackface.

And last year, Dolce & Gabbana canceled a Shanghai runway show and apologized after promotional videos seen as racist and subsequent insulting Instagram messages stoked a furor in one of the world’s largest markets for luxury goods. The ad campaign featured a Chinese model trying to eat pizza, spaghetti and a cannoli with chopsticks.

Non-Italian fashion brands have also been on the receiving end of complaints about insensitive products, behavior or ad campaigns.

British designer John Galliano was removed as creative director at the French fashion house Dior in 2011 and later given a suspended sentence by a French court for having made an anti-Semitic and racist rant at a Paris bar. The designer apologized and said he had been under the influence of alcohol and prescription drugs at the time.

In 2014, the owner of Spanish retailer Zara recalled a children’s shirt that resembled the uniforms that Jews wore at Nazi concentration camps, with strips and a bright yellow six-pointed star recalling the Star of David. Owner Inditex said the shirt was designed to be part of a Wild West clothing theme and the star was intended as a sheriff’s badge.

And last year, Swedish retailer H&M pulled an ad featuring a black child wearing a sweatshirt with the words “Coolest monkey in the jungle.” The campaign sparked celebrity protests and in South Africa, members of an opposition party stormed into some stores. The retailer apologized.

But most recently it has been Italian fashion houses that have been the target of celebrity and rank-and-file outrage — magnified by social media.

Racism is particularly acute in Italy, where taunts against black players are a regular occurrence at soccer matches and the country’s first black Cabinet minister was subject to repeated insults by ordinary Italians and elected officials.

Just last month, a court in Bergamo, northern Italy, convicted a senator from the anti-migrant League party, Roberto Calderoli, of defamation with the aggravating element of racial hatred for having called the former minister, Cecile Kyenge, an “orangutan.”