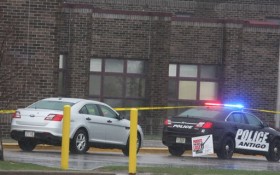 Authorities say a Florida man got out of his car after a crash, stripped off his clothes, walked away from the scene and then damaged a door of the responding deputy’s patrol car.

Dash cam video shows Humphries walking naked before the deputy stops him. When he tries to open the patrol car door, the deputy says, “That’s not normal,” then adds, “You are absolutely naked, my man. Another thing not normal.”

Humphries is also accused of ripping the door handle off another deputy’s vehicle.

Humphries remains in jail. Jail records don’t list an attorney for him.