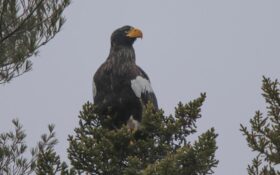 A rare species of eagle that has thrilled bird lovers and baffled scientists since arriving in Maine last month might not be in a hurry to leave.

The Steller’s sea eagle arrived in Maine in late December after a brief stop in Massachusetts more than a month ago. It has stuck to Maine’s middle coast, eating fish and ducks and attracting hundreds of birdwatchers from all over the world.

The sea eagle numbers only a few thousand worldwide and is native to northeastern Asia, including Russia and Japan, and has wingspans of up to 8 feet (2.4 meters). The bird is far off course, and it’s still unclear why it came here at all, said Doug Hitchcox, staff naturalist at Maine Audubon.

But the bird doesn’t appear to be in any kind of danger, Hitchcox said. It has an ample food supply and is living in habitat that is similar enough to its native range, he said. It’s possible it could eventually return to its home range, but for now it’s comfortable in Maine, Hitchcox said.

“This one is so far off course, it’s just purely speculation to say it could go back and then return. There is no reason it couldn’t make its way back to Japan or Russia,” he said. “It seems to be doing OK.”

It’s not uncommon for vagrant bird species to return year after year to places far from their typical range. A single red-billed tropicbird, a species commonly seen in the Caribbean and tropical oceans, has been seen off Maine in the summer for years. Birders affectionately call it “Troppy.”

Maine’s lone Steller’s sea eagle is an adult, and its sex is not confirmed. It is sometimes seen around bald eagles, dwarfing the national symbol. The Steller’s, named for German naturalist Georg Wilhelm Steller, is one of the largest eagles in the world, often weighing 13 to 20 pounds (6 to 9 kilograms) — twice as much as a bald eagle.

The bird drew dozens of onlookers to Reid State Park in Georgetown when it was first seen in Maine, and birdwatchers have continued to come to the state for weeks with no sign of stopping.

Allison Black, a birder from Connecticut, made the four-hour drive to see the bird Monday. Many bird fans are relying on websites and social media channels set up to help people track the eagle.

“I took my mom with me, too, who isn’t a birder, but heard the story about the eagle and wanted to see it. We actually tried to see it back in December when it was in Massachusetts, but missed it by 10 minutes. That hurt,” she said. “I saw in the alerts that it flew not too long after we left, so I’m thankful we were at the right place at the right time to finally see it!”