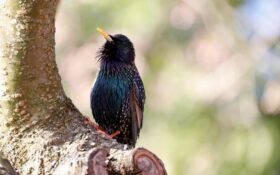 A family of jail birds has left behind a nearly $3,000 mess at the historic Steuben County Jail in northeastern Indiana.

The Steuben County Commissioners have approved spending that amount of money to clean up the waste left behind by a family of starlings, mainly in duct work at the old jail that’s now used by Northeast Indiana Community Corrections in Angola.

Community Corrections Director Bret Hays told commissioners a female starling entered the building through the attic and ended up in the duct work, where she hatched a brood of chicks, the Herald Republican reported Wednesday

“It dropped down. . . . It had babies. They were very loud,” Hays said. “She entered from the south and went out the north.

“There is bird waste not only in the ducts, it’s all over the place,” Hays said.

Not only will there be cleaning done, but disinfecting the ducts will occur to eliminate air quality problems.

Commissioners are going to look into filing a claim with its insurance company to cover part of the cost.

The former jail, completed in 1877, is on the National Register of Historic Places.