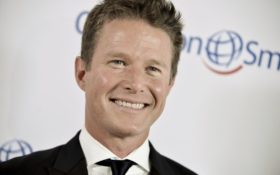 Jill Fritzo, Bush’s publicist, says in a statement that the couple has “separated for the moment to evaluate their life together.” She adds, “they love each other and their children deeply and are committed to a bright future.”

The separation comes nearly a year after a 2005 recording surfaced of a lewd conversation between Bush and then “Apprentice” host Donald Trump during an “Access Hollywood” shoot. The video rocked Trump’s presidential campaign and led to Bush’s ouster from his “Today” post.