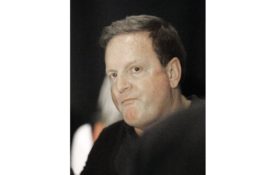 The coroner’s office is investigating to determine the cause of death.

“It is with the deepest regret and sadness that we announce the death of Andrew C. Burkle on January 6, 2020 in Beverly Hills, California,” his family said in a statement released through his father’s company.

“Andrew was known as a young man full of life and entrepreneurial energy,” it added. “Everyone he met commented on his humble demeanor and strong work ethic.”

Andrew Burkle was 26, according to a date of birth provided to The Associated Press by the coroner’s office.

His father is founder and managing partner of The Yucaipa Companies investment firm, a co-owner of the NHL’s Pittsburgh Penguins, an investor in Sacramento’s Major League Soccer team and holds numerous other positions.

Andrew Burkle’s biography on the entertainment industry database website IMDb identified him as a producer and actor with several credits.

“Drew was a bright, creative, energetic young man with a dynamic future ahead of him,” Penguins co-owner Mario Lemieux said in a statement. “Everyone in our organization knows that he was such a big part of his Dad’s life, and one of the many things they shared together was their love of Penguins hockey.”

David Morehouse, the Penguins’ president and CEO, said he knew Andrew Burkle since he was a little boy.

“I never met anyone with such a kind heart, gentle spirit and humility, all wrapped up in love and respect for his Dad,” Morehouse said.

The Beverly Hills Police Department said in a statement that police and fire personnel responded at 7:26 p.m. Monday to a report of an unconscious man at a residence and determined he was dead.

The death investigation was referred to the county coroner’s office, according to the police statement, which did not identify the man.

“Andrew Charles Burkle (DOB: 10/27/93) was found unresponsive in his Beverly Hills home on Jan. 6,” the coroner’s office statement said. “Authorities were called and Burkle was pronounced dead at the scene at 19:31 hours. An examination is pending.”

In addition to his father, Andrew Burkle is survived by his mother, Janet Duitson; a sister, Carrie Harr, and a brother, John Burkle.

The death was first reported by People magazine.