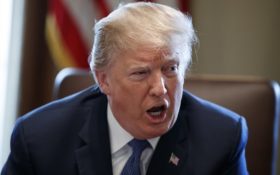 A billboard referring to Republican President Donald Trump as “Our Leader The Idiot” is making waves in a New Jersey town.

The billboard has been up since last week in Union Township, a town of roughly 60,000 people about 12 miles (19 kilometers) west of New York City.

Under the title it reads, “a new film— coming soon!”

Township spokeswoman Natalie Pineiro said Tuesday that people began noticing the billboard late last week and that she returned to work on Monday to find “dozens” of voicemails from residents. Pineiro said there were more than 100 comments on the town’s Facebook page.

The response has been “overwhelmingly negative,” Pineiro said. She added that she wasn’t sure how long the billboard was expected to stay up.

OutFront Media, the company that rents space on the billboard, didn’t immediately return a message on Tuesday.

Pineiro said township officials felt it necessary to send out a tweet explaining that since the billboard is privately owned, the township has no role in approving what is placed there. The tweet called the billboard “potentially offensive.”