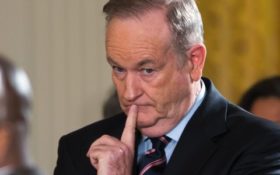 And another scandal just erupted — and if this this one is proven true, it has the potential to turn O’Reilly’s supporters against him… and could even secure his place in history as one of television’s biggest creeps.

An affidavit from his divorce proceedings, signed and notarized October 10, 2011, was acquired by Jezebel and reported Tuesday. The document reveals an alleged case of assault by O’Reilly against his then wife, Maureen McPhilmy… and the details are shocking.

According to her statement in the sworn affidavit, McPhilmy returned to her Long Island home in December of 2009 to find O’Reilly half-naked engaging in phone sex at around 10:30 p.m.

Caught red-handed, O’Reilly allegedly “flew into a fit of rage,” slamming his wife against a nearby wall so hard that the force left a hole.

He then allegedly immobilized her, wrapping his arms around her shoulders, neck and hands and dragged her out of the bedroom and down the hall.

McPhilmy claims O’Reilly then dragged her down a flight of stairs and through the kitchen as she screamed for help.

Finally, a security guard heard her cries and came to her rescue.

The guard, assigned to protect O’Reilly and his family, quickly adapted to his new role protecting the family from O’Reilly.

He recognized the signs of assault and asked McPhilmy if she wanted to file a police report, which she denied.

While the story isn’t confirmed, there are many similarities with the sexual assault claims made by Fox News’ employees, and common assertions of lewd and perverted behavior by O’Reilly.

She claimed to have recorded the call, which was likely a factor in the $9 million settlement from O’Reilly.

In another tale of the repeat-offending creep, Fox News employee Juliet Huddy claimed O’Reilly made similar phone calls to her.

When she refused this, among other slimy advances, he attempted to sabotage her success.

Huddy sued O’Reilly, and settled out of court a payment in the high six-figures according to people familiar with the agreement.

While nothing is proven in the repeated accusations against O’Reilly, the similarities in the women’s stories raise red flags.

The most recent revelation of the assault claim from O’Reilly’s wife could be seen as grounds to make the final call that O’Reilly is guilty on all counts.

Do you think Bill O'Reilly is guilty of sexual assault?