Bill O'Reilly: Biden will arrest me for this - The Horn News 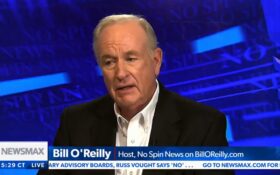 Former Fox News host Bill O’Reilly has finished writing a new book, he said in an interview with Newsmax TV on Wednesday — and what he said he uncovered could land him in jail.

“That book is full of classified information that nobody’s seen. I was lucky enough to be able to get it,” he told Newsmax hosts Sean Spicer and Lyndsay Keith. He said President Joe Biden’s administration will likely have him arrested… but he’s willing to accept that.

“I’ll probably wind up in prison for printing it, but I think Americans need to know.”

Americans need to know that we are safer, and the reason is technology. So, the American government, apart from the politicians, has harnessed technology to make it very, very hard for ISIS, al-Qaeda — these people — to organize and attack on our soil.

It can be done, but it’s hard to do. And with the listening devices and the Patriot Act still in place … [it’s] very, very difficult to do a large-scale terror attack in the USA.

O’Reilly defended the 2001 Patriot Act, which allowed law enforcement to tap phone lines, eased communication between the different counterterrorism agencies, and increased the penalties for crimes of terrorism.

Some critics question the extent to which phone tapping actually helps to apprehend terrorists.

O’Reilly plans to refute these critics in his book — even if he reveals secret information and angers the Biden administration.

“I know, I think, as much about American security as anyone on the planet,” O’Reilly said.

O’Reilly has become best known for his 40 year-decade-long career in broadcasting, culminating in a 21-year stint on Fox News.

He left Fox News in 2017 while settling lawsuits over sexual harassment, and he now hosts a podcast called No Spin News.

He has remained a prolific author and has published more than a dozen books across multiple genres, from crime thrillers to popular nonfiction.

Most notably, he has committed to a series of biographies, including Killing Reagan, Killing the SS, and Killing Crazy Horse.

He wrote the book with nonfiction author Martin Dugard, an old collaborator from the Killing series.

“With fresh detail and deeply-sourced information, O’Reilly and Dugard create an unstoppable account of the most important war of our era,” says the Goodreads preview of the book.

“Killing The Killers moves from Afghanistan to Iraq, Iran to Yemen, Syria, and Libya, and elsewhere, as the United States fought Al Qaeda, ISIS, and the Iranian Revolutionary Guard, as well as individually targeting the most notorious leaders of these groups.”

O’Reilly’s latest book will be published on May 3 of 2022, Goodreads estimates.