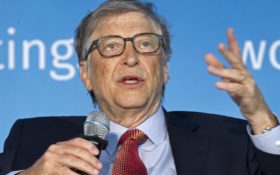 Bill and Melinda Gates have announced they’re filing for divorce.

Now, the shocking reason behind their split has come to light.

Multiple sources close to the couple say Melinda decided to call it quits because of Bill Gates’ relationship with billionaire pedophile Jeffrey Epstein.

“Melinda told friends after the encounter how uncomfortable she was in the company of the wealthy sex offender and how she wanted nothing to do with him,” reported the liberal website The Daily Beast. “Gates’ friendship with Epstein — who for years was accused of molesting scores of underage girls — still haunts Melinda, according to friends of the couple.”

Epstein had close relationships with some of the world’s wealthiest and most powerful elites, including former President Bill Clinton. He often flew his contacts on his private jet, the Lolita Express, to his personal island, where Epstein reportedly molested a harem of young girls for years.

Some of Epstein’s victims said his guests also molested them. No allegations have been made about Gates before or after Epstein died in jail in August 2019 of an alleged “suicide.”

But Bill Gates started his relationship with Epstein — which he says was purely about business — in 2011, three years after Epstein copped a guilty plea to being sexually involved with underage girls.

The meetings became public in 2019, when The New York Times reported that “beginning in 2011, Bill Gates met with Jeffrey Epstein on numerous occasions — including at least three times at Epstein’s Manhattan townhouse, and at least once staying late into the night.”

Bill Gates said at the time that these were formal meetings, and that he “didn’t have any business relationship or friendship with” Epstein.

“I didn’t go to New Mexico or Florida or Palm Beach or any of that,” Gates said. “Every meeting where I was with him were meetings with men. I was never at any parties or anything like that.”

But a source close to Gates told The Daily Beast that if Gates didn’t know about Epstein’s sickening character, he should have.

“If you ask Bill Gates, he’ll say, ‘Oh I had absolutely no idea he wasn’t up to anything of the highest moral character.’ But I seriously doubted Epstein’s moral character,” the person, who wanted to remain anonymous, said.

Melinda Gates said she told her husband she was concerned about his growing relationship with Epstein in 2013, to no effect. The Wall Street Journal reported that she began divorce proceedings in 2019.

Gates says the two only met to discuss “philanthropy,” since Epstein regularly made large donations to scientific research at Ivy League schools—including a grant to a project headed by Eric Lander, whom President Joe Biden has tapped to head the Office of Science and Technology Policy.

Epstein brokered a $2 million donation that Gates made to MIT’s Media Lab in 2014.

But the two billionaires had connections deeper than money.

Melanie Walker met Epstein in 1992, when he offered to get her a job as a Victoria’s Secret model and let her stay at his apartment. She worked her way up to become Epstein’s science advisor, but then she went to work for Bill Gates’ foundation.

Another former Gates advisor named Boris Nikolic was named an executor of Jeffery Epstein’s will.

Nikolic said he has no idea why Epstein named him to play this role in his estate and that he was never consulted about it.

Melinda seems to think there were enough red flags to keep her distance—but Bill didn’t agree. That drove a wedge into their relationship.

They announced on social media last week that their marriage was “irretrievably broken” and that “we no longer believe we can grow together as a couple in this next phase of our lives.”

If Melinda’s friends are telling the truth, Bill Gates’ relationship with a pedophile like Jeffrey Epstein cost him his marriage…and possibly half his estate.

The power couple, who are worth at least an estimated $134.1 billion, didn’t sign a prenuptial agreement when they got married in 1994.

Who knows what Gates’ relationship with Epstein may have cost Epstein’s victims.