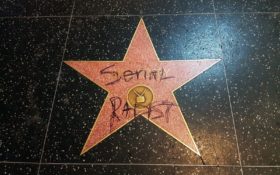 Bill Cosby’s star on the Hollywood Walk of Fame was vandalized by someone who scrawled the words “serial rapist” with a marker pen.

Los Angeles police found the marred sidewalk star early Tuesday, City News Service reported. The graffiti was similar to vandalism that occurred in 2014 and has since been removed.

Cosby was convicted in Philadelphia this year of aggravated indecent assault on a former Temple University employee who is among many women who have stepped forward to accuse the comedian of sexual misconduct.

Cosby has denied any wrongdoing.

Cosby’s star, dedicated in 1977, is a short distance down Hollywood Boulevard from President Donald Trump’s star, which has been vandalized twice with heavy tools that caused significant damage.

Trump’s star was unveiled in 2007, recognizing his work on the reality TV show “The Apprentice.” It has also been repaired.

The Walk of Fame is administered by the Hollywood Chamber of Commerce, which has never removed a star.