Bill Clinton's entire Father's Day was ruined when he heard... - The Horn News 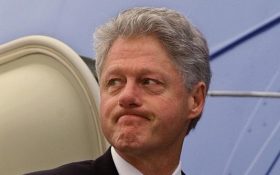 Former President Bill Clinton had no message for America on Father’s Day — but a man claiming to be his illegitimate son had one for the Clinton family.

Danney Williams, a 33-year-old man from Little Rock, Arkansas has claimed to be the illegitimate son of Bill for decades.

To celebrate Father’s Day on social media, Williams re-pinned a popular 2017 tweet that shows a surprising resemblance between the two men.

Even though you abandoned me and only took care of Chelsea, I still want to thank you for giving me life. Happy Father's Day @billclinton. pic.twitter.com/EMKla9lPM1

Williams story is extremely controversial. He claims Bill Clinton impregnated his mother while she worked as a part-time prostitute in the 1980s. Bill was the governor of Arkansas at the time.

According to Williams, his mother was intimate with Bill over a dozen times. But after giving birth, his family’s various attempts to reach out during Bill were aggressively rebuffed, and his mother said she was “chased off” by security.

According to The Washington Post, a DNA test done by a tabloid magazine in 1999 exonerated Bill.

Fact-checking site Snopes.com said in 2016 that the DNA test was inconclusive. Experts claimed the first DNA test excluded important information and wasn’t through enough to establish a legal standard. Williams has pointed out that his mother passed a lie detector test in 1997.

For years, Williams has reached out to Bill to reconcile the story — and get conclusive answers, no matter what the tests showed.

The family continued reaching out throughout the 1990s. According to Williams, these attempts caused rising tensions.

During one confrontation, Williams’ aunt claimed she was threatened to “leave [Bill] alone” or she would “come up missing.” Later, she was seriously hurt when she pushed out of a window by a stranger. According to one interview, his aunt says she still feels threatened to this day.

Williams said his mother would receive anonymous envelopes of cash every month when Bill was governor, but those payments stopped when the Clintons moved to the White House. His attempts to sue the former president for a second, conclusive DNA test have failed.

On social media, there was an outpouring of support for Williams on Sunday.

@danney_williams ????% believe u. Always have! Never doubted. I’m sorry for what you’ve gone through. Your strength is commendable & u have a sweet spirit, dude. Happy Father’s Day

And @ChelseaClinton has a half brother. Congratulations ????

The 24-word message from 2017 was the only Father’s Day message involving Bill this year.

Bill, Hillary and Chelsea Clinton also did not issue any public statement on their personal social media accounts.

In fact, not many people were mentioning Bill on Father’s Day…

Except for Rep. Alexandria Ocasio-Cortez, D-N.Y., who slammed the former president on Father’s Day for his history of rape allegations on ABC News’ “This Week.”