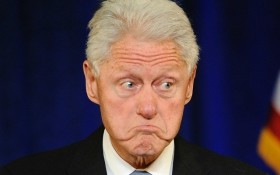 On Thursday, they spoke to a half-empty theater in New York City — but they didn’t expect a hostile audience.

Bill had nothing left to say after someone in the crowd complained their talk was uninteresting — and asked about Bill’s frequent trips on convincted pedophile Jeffery Epstein’s plane.

“Bill, this is boring!” the heckler reportedly yelled. “Why don’t you talk about Jeffery Epstein!?”

Epstein, a billionaire and close friend of Bill’s, was convicted of rape and pedophilia in 2008. He’s suspected to have violated dozens of underage girls.

The heckler was referring to the 22 occasions between 2001 and 2003 — often leaving behind his Secret Service detail without explanation — that Bill received a private flight on Epstein’s infamous plane nicknamed the “Lolita Express.”

“Epstein also gave generously to Clinton’s campaign for president,” The Daily Wire reported. “Epstein is in the final stages of what appears to be a plea deal in New York, and has never revealed the extent to which Clinton participated in his reported jaunts. Clinton, likewise, has remained mum on his involvement with Epstein, though it does seem he took frequent trips with Epstein on his private plane.”

He was silent as Hillary interrupted the heckler. She said the man was disrupting an “important political conversation” and called him an “agent provocateur.”

They went back to fielding softball questions as the man was led out.