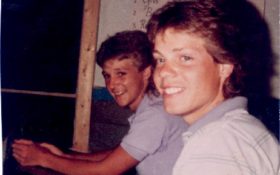 That’s not all. According to local station KATV, Haynes has even hinted he has video evidence to prove his claim.

31 years ago, the small town of Mena, Arkansas woke up to find two young men — Don Henry and Kevin Ives — had been hit by a train. The dubious circumstances surrounding their tragic deaths is now known as “The Boys on the Tracks.”

Conspiracy theorists have insisted for years that Bill Clinton was involved.

They’re not alone. The Wall Street Journal reported in 1996 that Linda Ives also believes her son, Kevin, was murdered and that state, local and federal authorities conspired to cover it up. She also firmly believes that Bill Clinton was involved in Kevin’s death.

The conspiracy theory says that while out hunting for deer, the two men stumbled across a drug drop being overseen by local police. The two were allegedly stripped of their hunting rifle by local authorities and killed – Kevin by blunt force trauma, and Don by stabbing.

On Feb. 11, 2018 Haynes came forward and publicly claimed he was present when the two were killed. He said that while touring with the World Wrestling Federation in the 1980s he would earn extra money as a hired enforcer for powerful cocaine dealers to feed his drug addiction.

Haynes claims he was there when the two men stumbled across an illegal cocaine deal involving high-ranking Arkansas officials, including an unnamed “politician drug dealer” that had ordered murders in the past. The alleged cocaine deal, the video says, was directly ordered by this “criminal politician” and was connected to the Iran-Contra scandal.

During the initial investigation, local authorities initially said the two men smoked pot and passed out on the tracks before being struck by the train.

In 1998, however, a grand jury ruled in the families’ favor that the boys had likely been murdered before being placed on the train tracks.

Now, Haynes claims he was there as a masked enforcer – and he’s come forward with wild accusations. He even hinted to Little Rock’s WKARN radio station that he has secret video evidence of the boys being struck by the train as proof of his involvement.

Critics say that Haynes has a history of making far-fetched claims involving murders. And Haynes himself admits to have CTE and frequent headaches from his years in professional wrestling and drug abuse.

However, defenders say there’s a reason that his Arkansas claim lacks corroborating evidence.

“Several of the officials named in Haynes’ confession reportedly went on to be convicted on unrelated drug charges, or were themselves murdered,” The Sun reported.

“Everything [Haynes] says is consistent with all the evidence,” Little Rock attorney David Lewis, representing the Ives in a federal lawsuit, told KATV. “So… either he was there, or he has done a lot of studying and has a great memory.”

It’s worth noting that Haynes has talked about being involved in drug trafficking in interviews as far back as the early 2000s, and confessed his involvement to Lynda Ives as far back as 2006.

The boys relatives have come forward and said they hope Haynes new public confession will be investigated by the police.